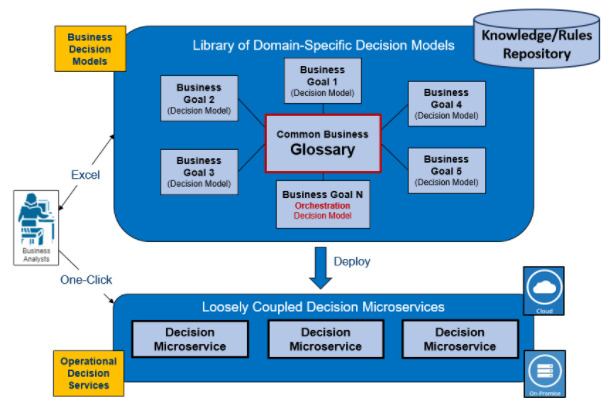 The general architectural schema of the library is shown above. It includes multiple decision models with some of them being deployed as cloud-based decision microservices. It also includes a special Orchestration Decision Model that describes how to orchestrate other decision services.

The OpenRules release include a workspace “LoanOrigination” that implements a library of decision models for the Loan Origination domain using an example from the DMN Section 11. You may freely download it from here:

Extract (unzip) the downloaded files and you will get the folder “LoanOrigination” on your hard-drive. This folder contains several decision models that implement various goals and sub-goals for the loan origination domain.

There are many small sub-goals and two main goals “BureauStrategy” and “Routing” deployed as external decision services: 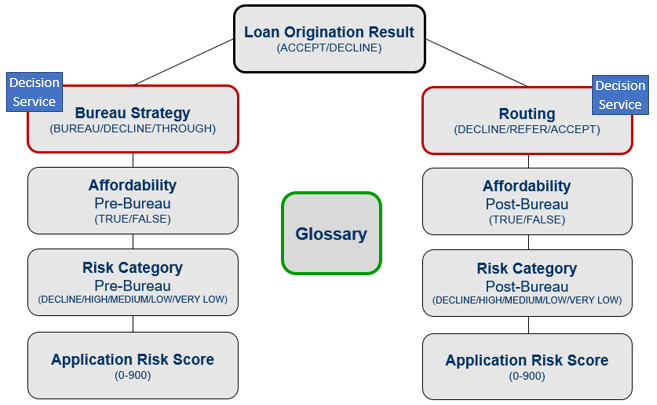 This library is described in this BBC-2020 presentation “Building, Deploying, and Orchestrating Complex Decision Services” – see slides and watch the video.

To be able to build and executed an integrated decision model “Result“, you need first to build and deploy decision models “BureauStrategy” and “Routing” as AWS Lambda functions. To do than you need to adjust the properties in their file “project.properties” to use your own AWS account, and simple run “deployLambda.bat” files.